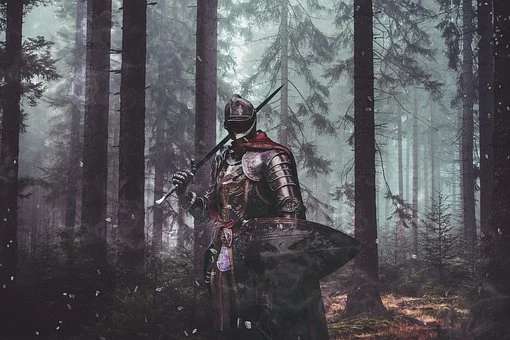 The Oracle wasn’t vague with her words.

King Evander, the kind and justly sovereign, was foretold to be slain by his own descendant.

The prediction shook him. Nothing else took up the space in his mind as he left the Oracle’s villa. Or when he rode back on his steed. Or when he returned to his castle. Not even when he sat down to eat dinner.

When he laid down to sleep, his thoughts poked at him like pins with the ponderings of when the last time may be that he lays before he never awakens. His dreams were pervaded with images of swords and babies’ faces, unearthly wailing clawed at his ears, too horrifying to be the product of imagination.

Evander felt sick all of the following day. His stomach wrung itself so tightly into knots that he could barely keep any food down.

He shut himself up in his room, refusing to meet the eyes of anyone in the castle. He needed time to himself, yes that was it. He wasn’t paranoid of anyone outside his door.

Evander, like all kings before him, simply didn’t want to die. Much less by his own kin. While the world seemed to carelessly carry on without him, he speculated and schemed possible ideas for how to avoid his future.

But he loved his son dearly, and he enjoyed his daughter-in-law’s company. He couldn’t bear the idea of killing them or sending them away. Most importantly, however, King Evander knew the stories. Tales of heroes often included the malicious ruler who, once they heard their fate, ultimately met it in their efforts to outrun it.

So, after a week of wallowing and dreading the worst, King Evander decided to do nothing.

The castle staff gave their employer strange looks after his total heel turn in behaviour. Washing maids would sneak quick glances at him in the halls before scurrying off to their stations somewhere down the service corridors. A few stewards gawked at him when he left his room, before returning to conversing with other staff.

The most evident of reactions was from Evander’s son, Dillon, who wouldn’t take his eyes off his father after he had left his quarters. He refused to leave his side particularly after being informed about what the Oracle had said. He worried for his father and wanted to know if he was feeling alright.

Finally, Evander assured his son of his well being and Dillon seemed to accept that answer. Dillon’s wife, Leona, watched in concern from the sidelines, unsure if it was her place to comment.

Months passed, and before anyone knew it, Leona became pregnant. Evander and Dillon treated her with care and respect. Throughout the pregnancy, Dillon showered his wife with love any chance he got.

Soon after, Evander’s grandchild was born and the baby shared his forget-me-not blue eyes.

As Evander’s heir grew up, they were joyous and full of life. Evander had a hard time getting his duties done because often he was too busy playing with the child. The stone walls of the castle felt happier and more welcoming when the child’s squeals of laughter bounced off of it.

When the child found they were able to run and jump without falling over, they begged to take up warrior’s training. Their parents looked warily at King Evander but he nodded his head and accepted the request.

The child pushed and pushed themselves in their training, working hard to succeed. They became an excellent warrior and found themselves good at handling the sword. Evander silently watched as his descendant twirled their weapon in a feat of showmanship and tried not to notice the biting concern at the back of his skull.

It was then the child chose a name for themselves: Caragh.

One afternoon, Caragh had another session where they faced their mentor in a match of winning the most rounds. Evander sat on a stone bench and watched from the side, arms crossed and eyes attentive.

Caragh, feeling encouraged by their grandfather’s presence, moved quickly. They sidestepped their mentor’s attack and brought up their own, knocking the blade out of their opponent’s hand.

That made four out of five rounds won by Caragh. They cast their attention immediately to Evander, a hopeful expression on their face and a sparkle in their eye.

“Grandfather!” They called. “Did you see that? Did I do good?”

Evander seemed to be staring off into space, eyes trained on Caragh’s weapon. After a second of pause, he made eye contact and the corners of his mouth raised into a smile.

Caragh gleamed and skipped as they went to put their equipment away.

Peace could never last forever. Evander’s diplomats could only have appeased the cacodemons for so long. As he rode on to the battlefield with his army, he thought to himself about what he could have done to put this off for longer.

He looked to his right where Caragh sat, an unclear emotion shown in their eyes. It had been a few years since they reached adulthood, but every time Evander looked at them he was reminded of the child who would run around the castle hallways and shriek when caught.

King Evander took a deep breath from atop his steed, and then the battle commenced.

Shadows, arrows, and swords flew around so quickly the world seemed to be a blur of muddy colours. Blood seemed to fly around twice as fast.

The grey in Evander’s hair matched his armour as he panted heavily and gripped his sword. He just needed a moment, a moment was all he needed. A moment was all the cacodemon behind him needed as well.

Evander gasped. The stories had said that cacodemons could be very manipulative, though they never mentioned how far their methods spanned.

Evander’s hand moved without him commanding it to. Then his arms. Then his legs. He cried out, his lips being the only muscle that still seemed to obey him.

There was no escape from this he knew, he was tired and weak from the battle. He was an old man, he should have been taking a nap.

The entity within him raised the arm that held his sword and shook it, pointing in a direction that led straight to some waiting cacodemons. They did not have a kind look in their eyes.

Evander’s men wouldn’t know this wasn’t him commanding them and so he resorted to the last solution his mind went to.

He screamed at Caragh, who immediately ran over and noticed the inhuman shift in his posture. Caragh met Evander’s eyes nervously and was about to say something when Evander cut them off.

“Please, do it,” He pleaded. “I’d die a slow death anyway if nothing was done. They’ll understand you did this to keep the enemy from winning. Please, Caragh.”

Caragh swallowed back tears. They whacked the sword out of their grandfather’s possessed hand and quickly hugged him. The entity must have been too shocked to understand what they were doing before Caragh quickly pulled away again. They met their grandfather’s gaze and nodded their head, accepting the request.