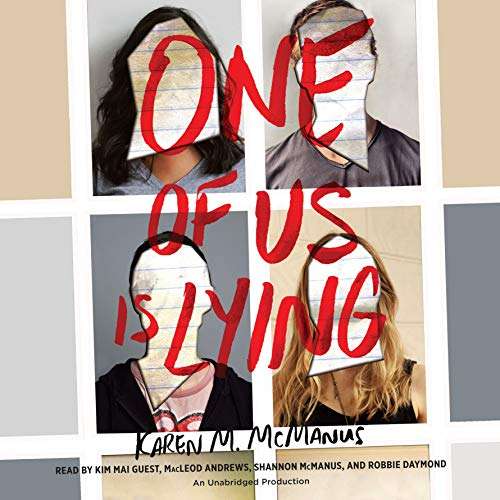 Karen McManus's One of Us is Lying is an engaging murder mystery novel about a murder in a high school where four students are the main suspects. This is her debut novel which was published on May 30th, 2017. Each chapter focuses on a character's point of view and is told from their perspective.

It all starts on a Monday afternoon when five senior students, Simon Kelleher, Bronwyn Rojas, Nate Macauley, Cooper Clay, and Addy Prentiss, arrive in the science lab for detention. Simon goes to the faucet at the back of the lab to pour himself a cup of water and takes a sip. Then he announces that it tasted terrible, drops the cup, and suffers from an allergic reaction. The other students in detention scramble to find his epi-pen because he's anaphylactic to peanuts, but the medical aid is missing. Shortly after, the paramedics arrive and take him away. The next day, the four students are called into the office. An officer announces that Simon's autopsy showed that he ingested a large amount of peanut oil shortly before his death. The four were now all suspects for Simon's death. Who killed Simon? What motive did they have to kill him?

I have nothing but praise for this book. The way McManus chose to write One of Us is Lying, changing the story's point of view, allowed me as a reader to read the story from multiple perspectives and investigate each individual's motives, which helped me predict who killed Simon. Switching the point of view left me on edge at the end of each chapter, eager to read the next chapter from this character's point of view. The only downside to this style is that it can get confusing if there are too many perspective shifts. McManus avoided this problem by adding the perfect amount of perspectives and providing each chapter with a unique take. I loved this book because the author used stereotypical characters such as the brain, the jock, the popular princess, and the burnout, but gave each character their own spin. We saw each character's self-discovery and how they broke the stereotypes placed upon them. We also see relationships that form between characters that we wouldn't have expected. I could not speak an ill word about this novel. Not only is it a great read, but it has several important messages for all, especially young readers. These include appearances are deceiving, the effects of social media, media distortions of reality, and many more. I saw how each character struggled through these challenges and the steps they took to resolve their problems.

I recommend this book to those who love a great murder mystery or thriller book. This book is targeted toward a young adult audience as the intended age group for this novel is 14-17 years old.

I would rate this book a 4.5 out of 5 stars. This book had excellent character development and intriguing plot events. The ending was unexpected and took me by surprise. I have read several murder mystery novels, but this would for sure be one of my top three favourites. Karen McManus wrote this book making the reader feel like they were in the story and I certainly felt like I was in the book, experiencing what the characters were feeling and thinking and relating to what the characters were encountering. One of Us is Lying is a must-read for murder mystery lovers, and I can't wait for McManus' next book which comes out this month.