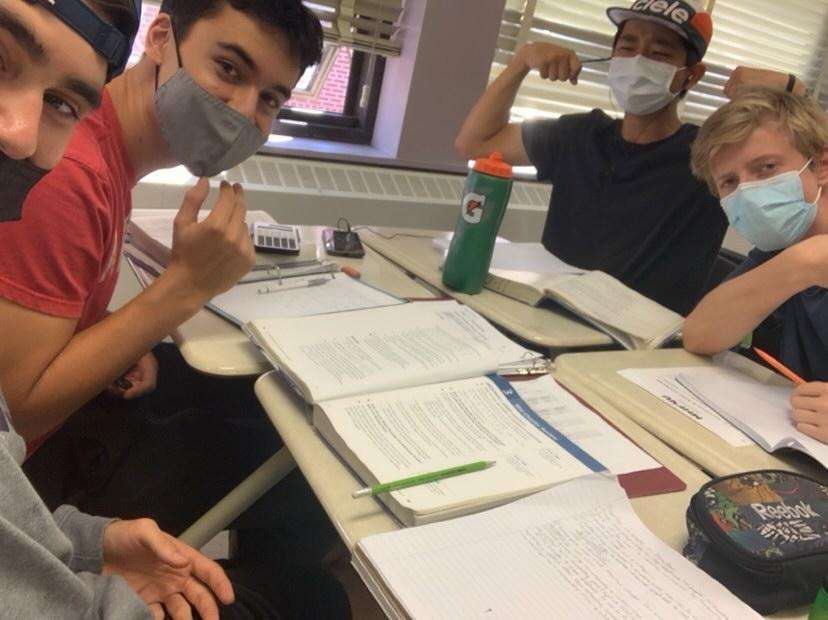 Remember March 2020? I'm sure you do. It was the moment the world changed as we know it.

Three days before March break: there was one thing on everyone’s mind. This new virus called Sars Cov-2, Covid-19 from Wuhan, China, was making its way through the media. There were discussions about whether or not they would extend our March break. The news was broken on Thursday, two days before the break would start. They made the decision to extend it by an extra two weeks. Which would mean we would be back on April 5th. Back to school like normal, right?

I had a soccer practice that day. On a cold, still March evening. That was our last practice for around 3 months, but we didn’t know it at the time. When I finished, I was parched so I decided to purchase a nice refreshing orange gatorade. As I exited the dome and began my journey home, I took a sip out in the cold without my hat. That night my throat felt a little weird and the next morning I wasn’t feeling too good. My throat was phlegmy, I had a fever and a light cough. I decided to stay home that fateful day, Friday March 13th. I would be back to school in a few weeks, right?

The next few weeks were the most unordinary. People were lined up outside of grocery stores, stocking up on dried foods and TOILET PAPER! I honestly don’t really remember what I did during the early days. I played a bit of an online survival game with two of my friends where we would be sent out to the middle of the ocean on a raft and have to figure out how to get to land. That only lasted about a week. I spent quite a bit of time on the computer. My caring mother urged me to go on walks, which I immensely enjoyed. I found it ludicrous when people would bolt across to the other side of the street in panic that I might be carrying the Wu flu. I remember seeing one of my school mates with a rather large dog on a walk. I gave him a slight nod and he reciprocated it as we shared a moment of comradery; we were not in this alone. We would see each other in school, right?

Once it was announced that we would not be returning to school and that the remainder of the school year would be online, that was when I assumed it would not be just two weeks to slow the spread. The rest of the school year was kind of shambolic. We couldn’t see our mates, no school work was mandatory and when there was a google meet, not many people showed up. At least the summer would be normal, right?

During the summer I would go to the park for some exercise. When I first turned the corner to the park, my jaw dropped to the floor. There were OTHER PEOPLE!? How could this be? It had never been like this before, I thought. In previous years when I had gone to the park, there would always be a net for me to shoot on. Now, I had to juggle on the sideline and wait for one to free up. I did, however, make some new friends. I would share the net with some lads who were in their first year of university. I remember whenever I would meet new people or even people I knew, they would be too frightened to shake my hand so they would either take a step back or they would do that funny little thing with the elbows touching. This couldn’t last much longer, right?

At long last, soccer had started up again. No one there really seemed to care about Rona. Woefully, we weren’t allowed to play real games against other clubs, but we were allowed to play other teams within the club. I remember getting kicked in the back of the head and blacking out for like 5 seconds. That was one of the highlights of the summer. The first time I went on the bus I was skeptical about touching the seats and ringing the bell, but the more times I went on it, the more harmonious I felt. I was no longer in fear of the virus. We would be back to normal soon, right?

The new school year came around and the school board created this ghastly system of four hour classes and coming into school every other day. I very much disliked this abysmal schedule. At home I got distracted and in class I couldn’t focus for that long. I found the face shields very amusing to look at, though. We would go through spells where we would be completely online for a couple weeks, which I much rather enjoyed than the original system. The classes seemed very lifeless in person and online. Some classes were better than others depending on the kids and teachers. The next school year would be normal though, right?

We went through a few lockdowns, which I found a bit weird. It flabbergasted me, how the government has the power to say “Hey, you have to stay in your house! Only go outside if you really need to and this is who you can and can’t see.” The lockdowns were utterly humdrum. Staying inside, the tedious walks around the block, not being able to see your friends or family. Something that ruffled my feathers was when I saw an advertisement saying, “I know these are tough times”. Honestly this ain’t so tough, because I’m pretty sure World War 2 might have been worse, or the Black Plague, or the Spanish flu. After being inside for a while, I had a new appreciation for the outdoors and my friends. We would probably never have another lockdown, right?

At the end of the school year I felt relieved as it was finally over. We ended up finishing online. I was looking forward to a summer of hanging out with the boys and a season of soccer. We got more of our freedoms back for the summer. We were able to have a real soccer season and hangout with friends. It felt good having a more normal summer, but will it ever be fully normal? The summer was good but flashed by quickly. In my mind I stopped for a minute, turned around and thought, Where did the past year and a half go? Good thing it’s all over...right?