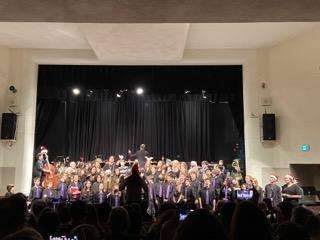 On December 15th, for the first time since 2019, the Nepean music department held their annual Winter Music Night. Music night is a long loved tradition of the music department and has been going on for many years and the whole department was happy to bring the tradition back.

The night started with a few numbers performed by the Jazz Band, playing “Let it Snow!”, “Witchcraft”, and “No Harm / No Fowl”.

Next up was the Percussion Ensemble playing “Up on the Housetop” and “Enable Original Sound”. Percussion is one of the many ensemble bands Nepean was lucky to see that night!

The Chamber Choir, one of the groups that night that spanned students from all four grades sang two songs, “Java Jive” and “And So It Goes”.

Following that Brass Choir, one of the newer groups, performed “Carol of the Bells” and “Three Newfoundland Folksongs”.

Up next was Concert Band, playing “A Zillion Nickels” followed by “Rocky Mountain Lullaby” and finally “Ruckus”

In the middle, All of the Bands, grades 9 through 12 came together for a very special performance of “Kyiv, 2022” by Brian Balmages a sequel to “Moscow, 1941” that had been a popular number for school bands across the world to play for a long time but had since been pulled from many school’s repertoire following the beginning of the War between Russia and Ukraine. The Composer Created the sequel in response to the War and as something for Concert Bands to play rather than the original. The Department also chose to give half of their ticket sales to organizations supporting Ukraine.

Following that, the Sax ensemble performed “Ode to Joy” and “Come to Sunday”.

The Concert Choir was next, the grade 9-12 vocal class performed “Day of Fire and Sun”, where half of the class surrounded the audience and sang in the aisles! This was followed by “Where the Light Begins”, “Frobisher Bay” and “Holiday Dreamin’”.

Nepean is so lucky to have so many talented and festive young players who were able to put on a delightful and exciting concert. The packed house was a big fan and the department had a very successful show. Bravo to all the students who performed!