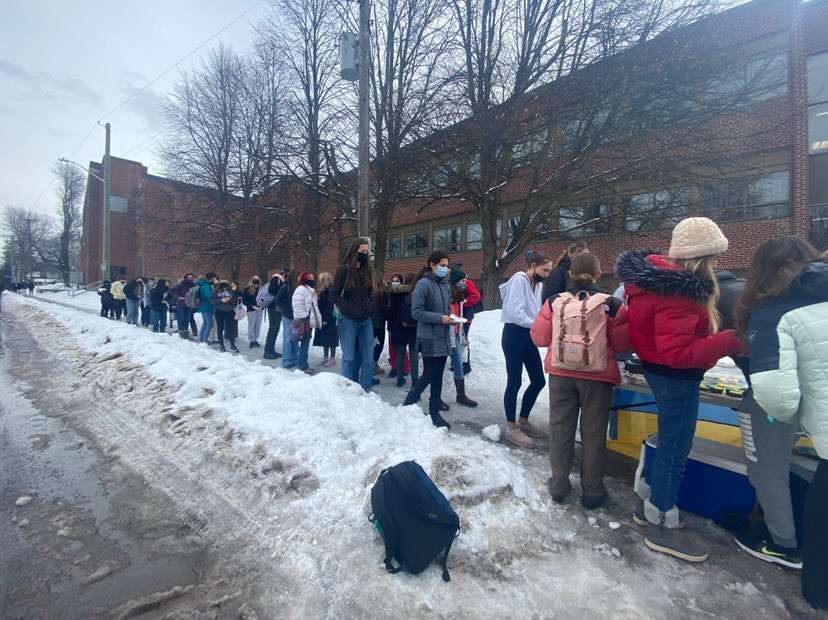 On Wednesday the 9th of March, Nepean students hosted a bake sale on Princeton Avenue in order to raise funds to support the people of Ukraine as the Ukraine-Russia conflict continues to escalate. In only a few days of preparation, these students pulled off an incredibly successful bake sale, raising $1273 in one hour. The money raised will be a split donation towards The Red Cross and Doctors Without Borders.

I went to the bake sale on Wednesday as both a patron and observer of this event. Despite how quickly the whole event had come up, the word had really spread and there was a long line down Princeton for most of the lunch hour. I spoke to grade 12 student Michael Jones, one of the main organizers, about this show of support from Nepean students. He told me, “We’re doing things by donation, so people are showing up with ten or fifteen dollar bills and getting like a cupcake. They’re really going above and beyond.” Michael has loved ones from the Ukraine and in his attempt to show his support, the results went far beyond the original expectations held for this event.

While the world witnesses the atrocities happening in Ukraine, it's important to remember that, as Michael puts it, “The suffering and destruction of livelihoods of people in places such as Libya, Iraq, and Afghanistan is equally as important.” While it's wonderful that we, the Nepean community, raised money in support of Ukraine, it's essential we realize that similar things are happening elsewhere and deserve the same amount of support and attention.

The Nepean community has done so well in showing their support for Ukraine and kudos to the people who made the bake sale happen.